A “prairie” is a permanent grassland with few or no woody plants. Prairies are fire-dependent ecosystems. Prairies differ from old fields and meadows in that the prairies are more or less stable and self-perpetuating, rather than being a temporary successional stage on the way to becoming a forest. The vegetation that occurs in prairie is mainly drought-tolerant graminoids (grasses and sedges), the growing parts of which are at ground level or below, and so are not harmed by occasional wildfires. Prairie graminoids are usually accompanied by other herbaceous plants, generally called “forbs,” that are adapted to drought and also low nutrient levels. (“Forb” is the term for any non-woody non-graminoid, i.e., what we’d normally call a “wildflower.”)

Prairies occur world-wide, generally in the interior of continents. North American prairie is drier in the west, bordering desert, and the type of prairie that occurs there is called “shortgrass prairie.” In the moister eastern half, adjoining deciduous forest, there is “tallgrass prairie.” Ohio is not usually thought of as a prairie state. Here are two maps from authoritative publications. Note how one shows us well outside the prairie biome, while the other correctly a few scattered prairie patches well within our boundaries.

Maps vary,  but there are prairies in Ohio.

Generally, where there is adequate moisture year-round, trees can survive, and so the principal vegetation type in Ohio is forest. It is believed that the prairies in Ohio, which comprised only about 1% of the state (and, sadly, of which only about 1% remain) are remnants of a time between 8,000 and 4000 years ago called the “Xerothermic Interval” when the climate was hotter and drier than today, and prairie extended as an eastward-projecting tounge across present-day Ohio, called the “Prairie Peninsula.” Fires deliberately set as a game-management tool by Native Americans are believed to have helped maintain a few prairies into the present day.Today, fire is still used as a management tool to maintain prairies. The principal benefit of fire is to eliminate woody vegetation, as the above-ground buds on tree saplings are susceptible to being killed by hot flames. 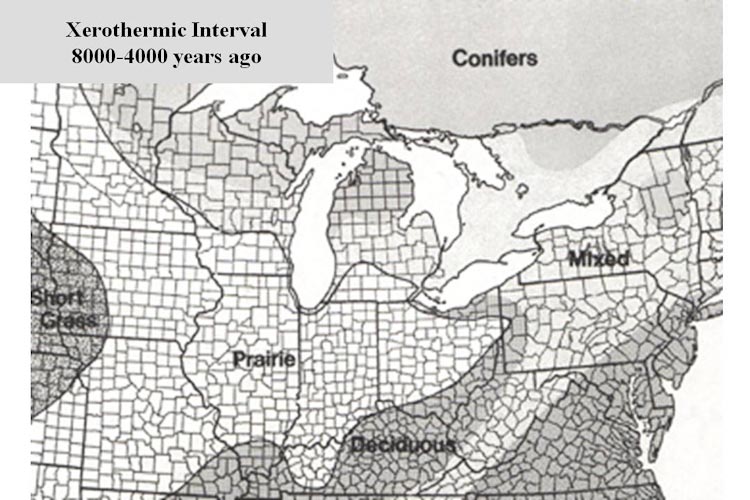 In the 1950’s, Robert Gordon mapped the vegetation of Ohio during pre-settlement times, using data from the earliest land surveys. On his famous map below, prairie is indicated in yellow. Notice please that there yellow patches are not scattered uniformly across the state, but are in discrete regional patches. 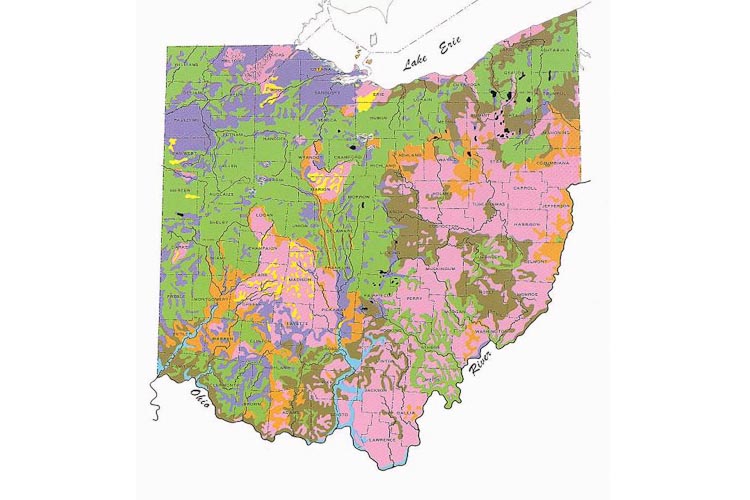 Prairies, having soil high in organic matter and lacking trees needing labor-intensive removal, and well-suited for agriculture. Hence, it is primarily conversion to farmland that has caused the elimination of nearly all of the North American prairies. 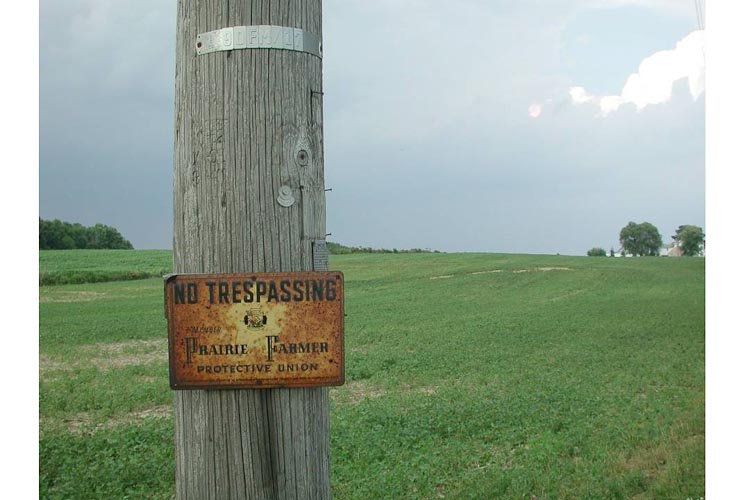 Nearly all of our prairie has been converted to farmland.

In Ohio and elsewhere. There are three principal types of prairie remnants: pioneer cemeteries, railroad rights-of-way, and lightly grazed areas. 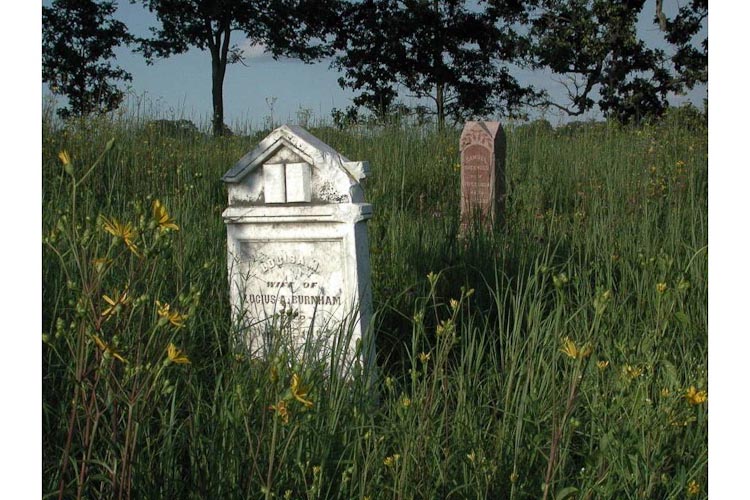 Railroads generally maintain a strip of land alongside their tracks that is untouched by the plow. Here’s one in Union County, called Milford Prairie which is also a State Nature Preserve. 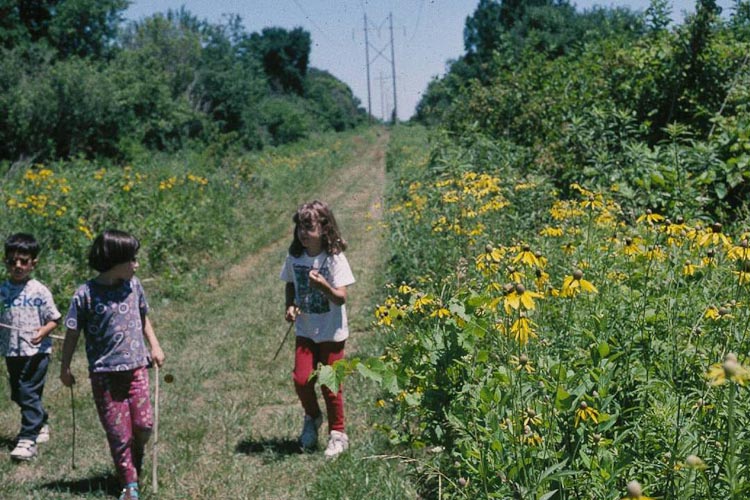 Milford Prairie was once a railroad right-of-way.

Since it’s woody vegetation, including native trees, that constitute a threat to prairies, light grazing that allows grasses to remain, can be a mechanical alternative to fire. In Crawford County, Daughmer Bur Oak Savanna is a grassland recently, supported a small herd of sheep. 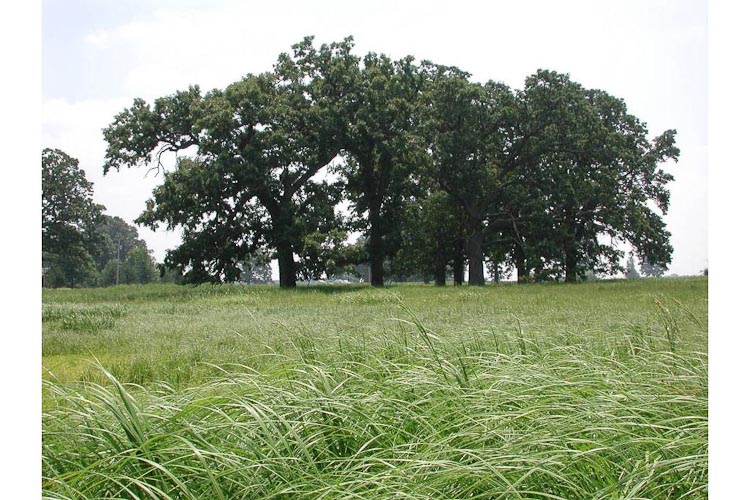 “Savanna” is the term for a grassland with scattered trees. In the tallgrass prairie region, bur oak (Quercus macrocarpa) is the tree most often seen scattered in prairies.

O.K. Enough with the jokes already. Bur-oak is a beloved and magnificent tree, well known for being the only tree that grows in prairies. Grasslands with scattered trees are called “savannas.” There is a magnificent savanna in Crawford County, the Daughmer Bur-oak Savannah where this species reigns supreme.  Other species of trees, even native ones such as ashes and maples, are considered weeds in prairies. If ever a windstorm were to sweep through Daughmer Savanah and damage trees, the instructions to tree surgeons dispatched to remedy the damage would be very clear: “If it ain’t bur-oak, don’t fix it!.” 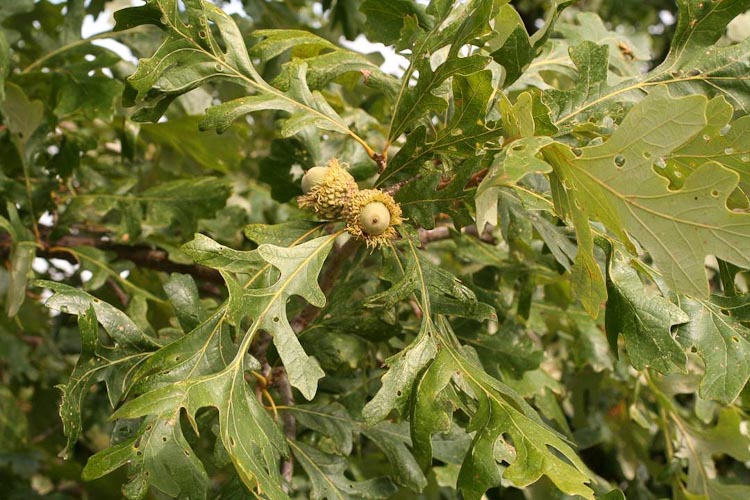 In Ohio we have a few regions where prairie is found, shown on the map below. 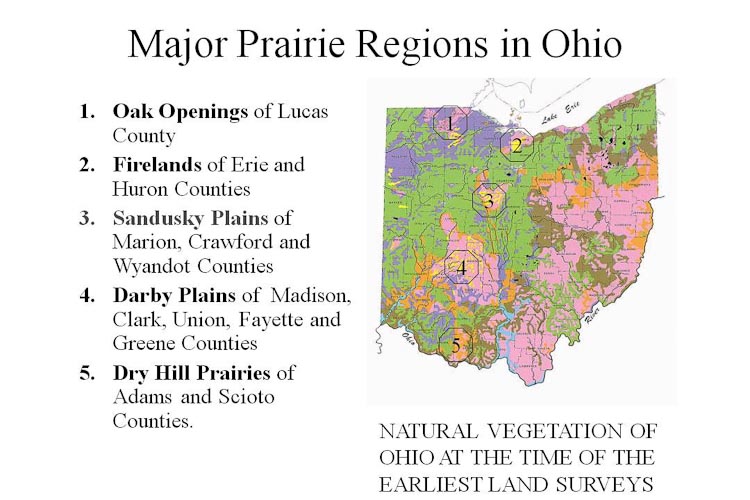 The “signature grass” of the tallgrass prairie is big bluestem., Andropogon gerardi. 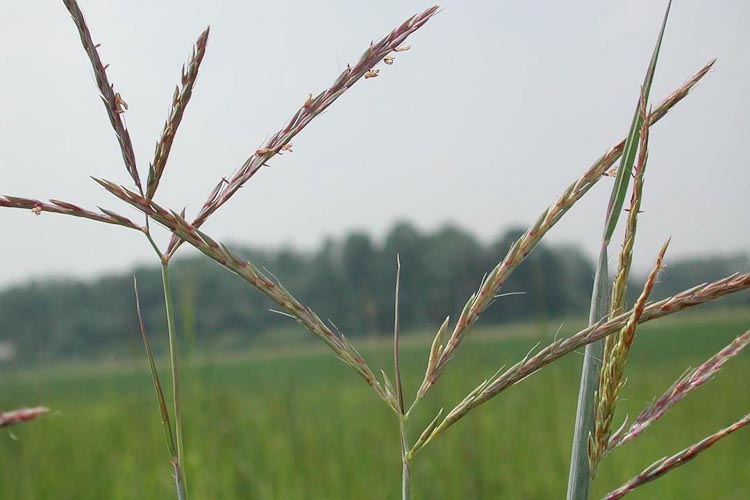 Big bluestem is the signature tallgrass prairie grass.
Its nickname is “turkey-foot,” because its spikelets are in a few spikes. 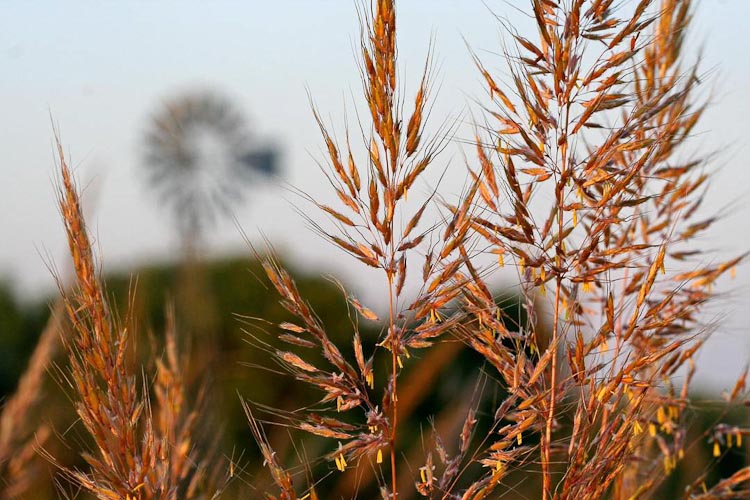 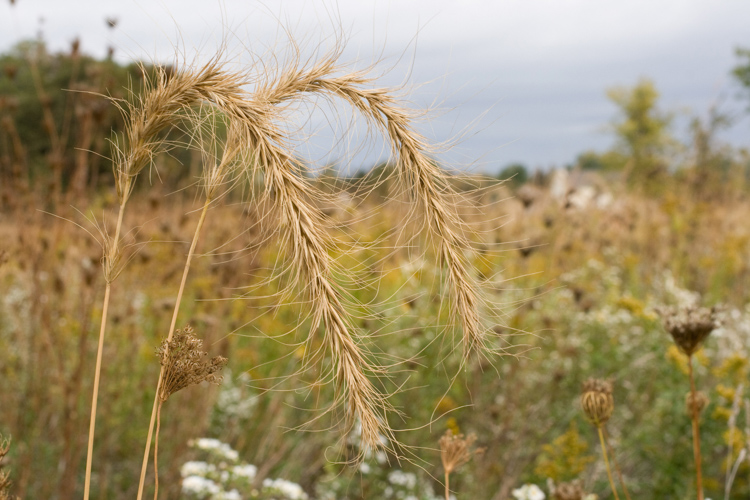 Switchgrass (panicum virgatum) does kind of seem like it’s panicking, as the spikelets are widely spreading on a diffuse panicle. 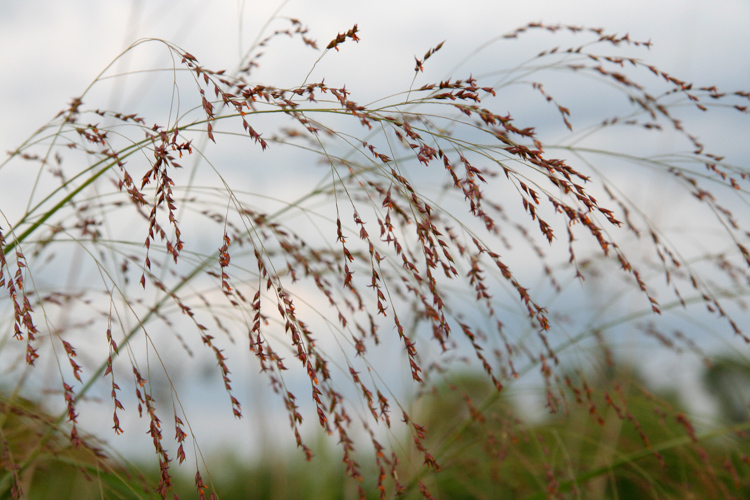 The aster family is especially well represented in the tallgrass prairie. The signature prairie forb is one of these; it’s prairie dock (Silphium terebinthinaceum). “Dock” is a general term for a plant with especially large leaves and, prairie dock sure fits that description. 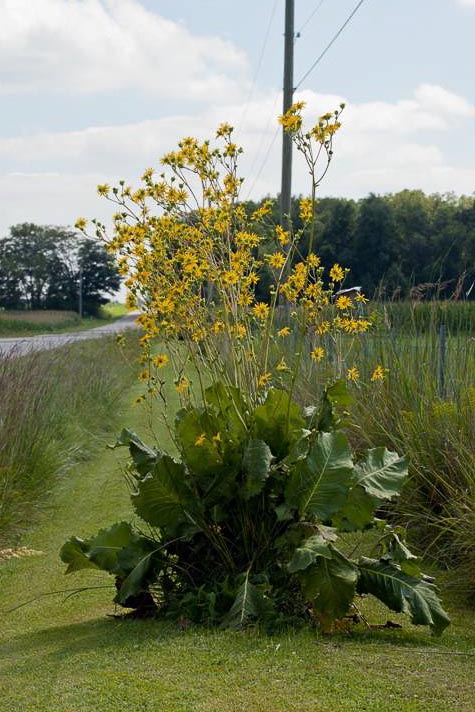 Prairie dock is a large-leaved composite.

Pasture thistle(Cirsium discolor) is a composite with purple-flowered discoid capitula. The plants are quite spiny. The are avidly visited by a variety of bees and butterflies. 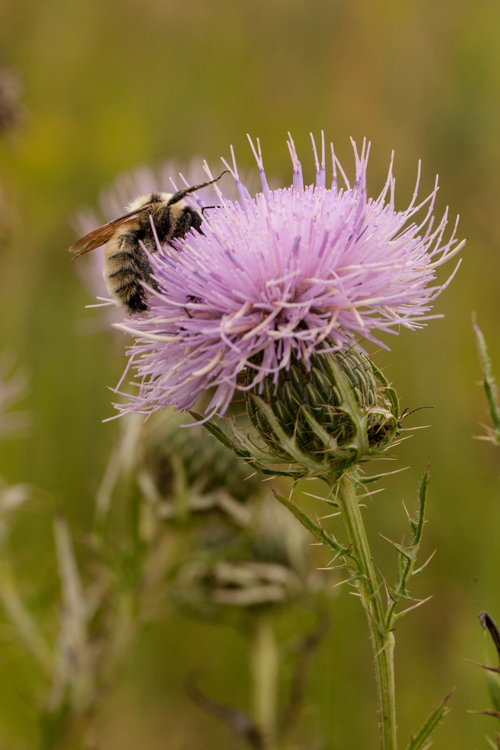 Sawtooth sunflower (Helianthus grosseserratus) is a tall, very typical “composite” (aster family member having a radiate capitulum). The flower heads have ray flowers that do not produce achenes; only the center (disk) flowers are fertile. 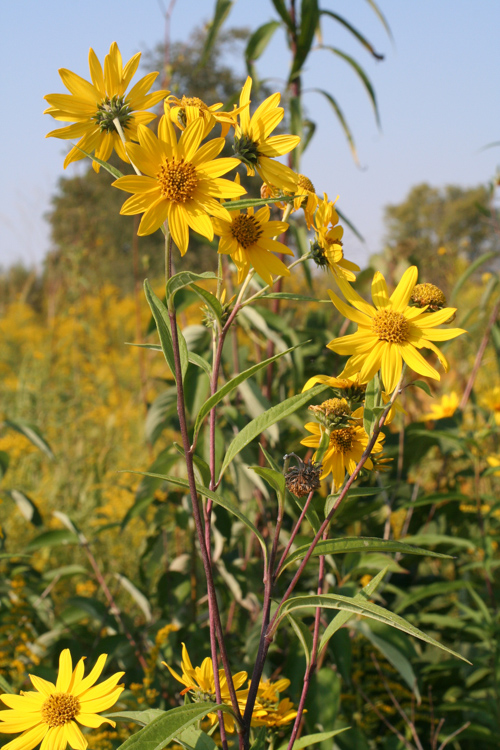 Sawtooth sunflower is tall, flowers in lare summer, and has a radiate capitulum. 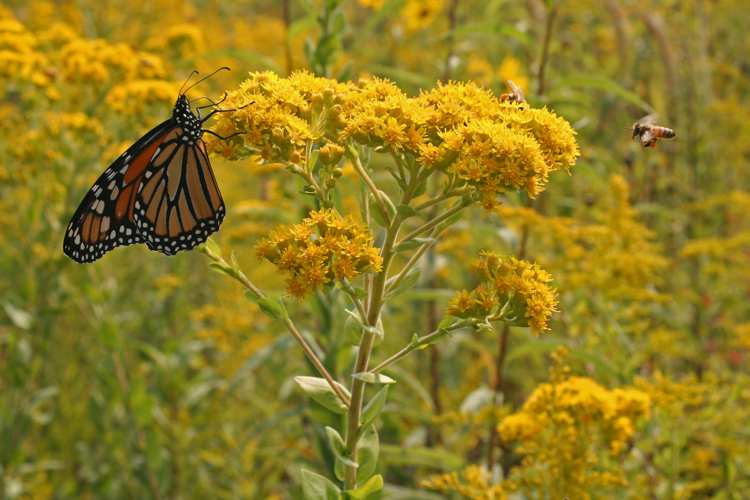 Perhaps because they have nitrogen-fixing bacterial root nodules that assist growth in nutrient-poor soils, members of the fabulous Fabaceae are prevalent in prairies. 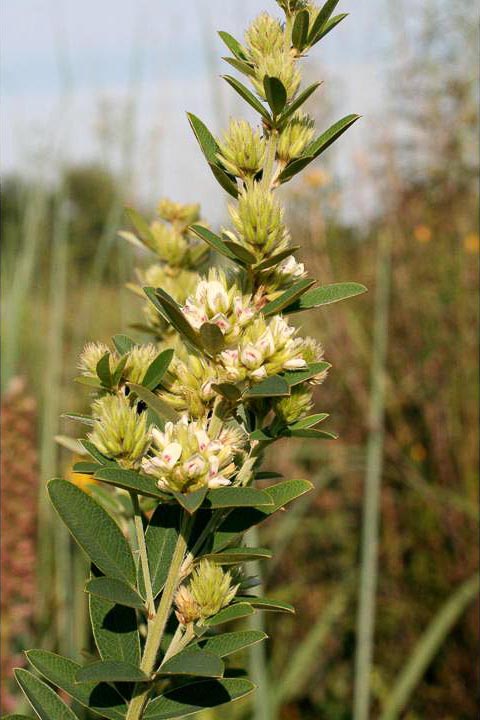 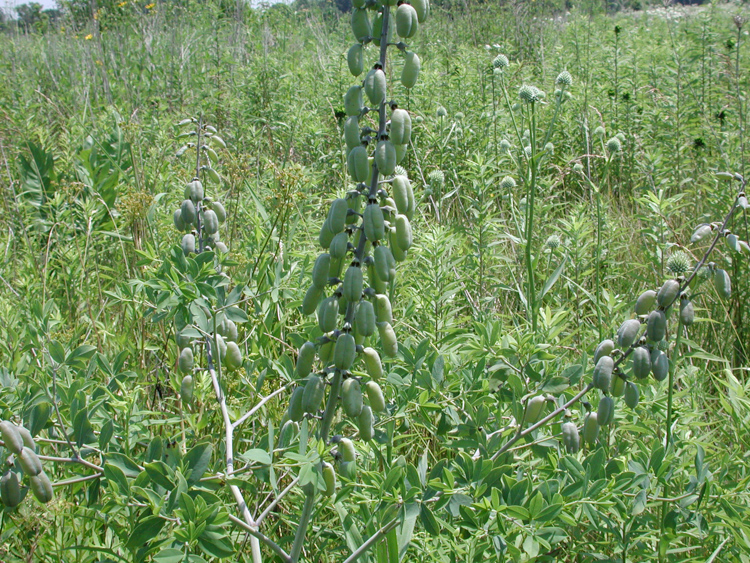 In flower, false white indigo blossoms are large, typical legume family flowers with an architecture that directs bees to contact the stamens and stigma. 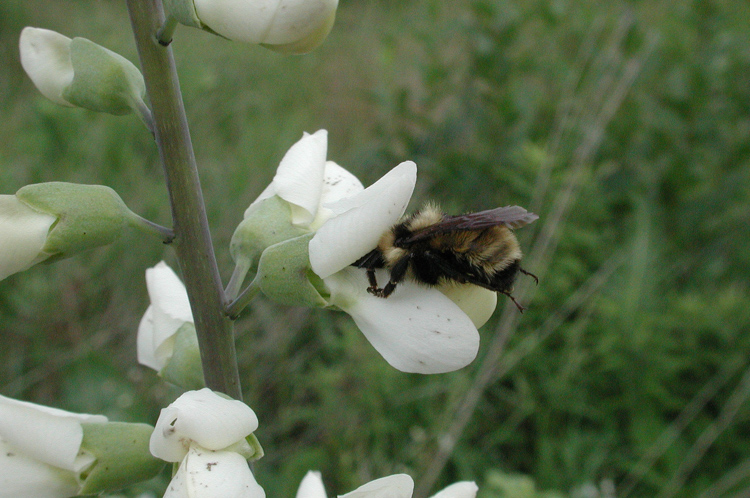 The false white indigo fruit is an expanded legume. 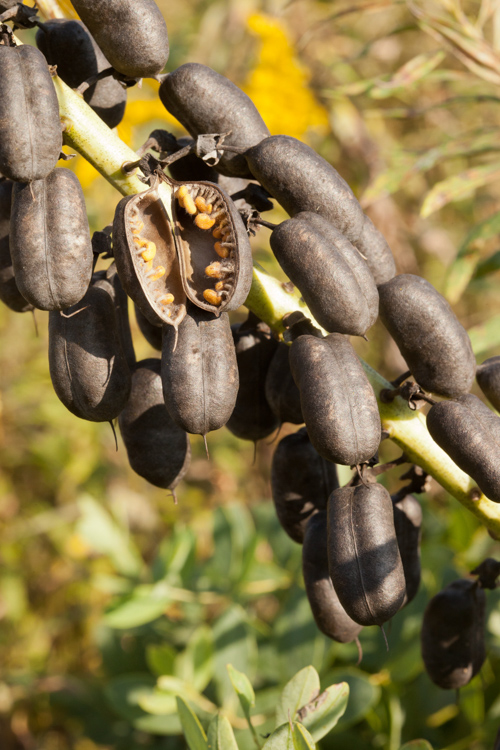 False white indigo fruits. One is opened to show seeds.