The Liliacaeae sensu lato  (i.e., in the broad sense) are our most typical monocots. They are most often perennial herbs bearing leaves that are alternately arranged, simple in complexity, and linear with parallel veins. The flowers are in most instances bisexual (i.e., perfect, also known as hermaphroditic), large and showy. They are most often polypetalous (i.e., with separate petals, also termed “choripetalous”), and hypogynous. The flowers are 3-merous with sepals and petals that are identical (except in Trillium, which has green sepals) so that there are 6 “tepals” all of which are colorful and petal-like. The androecium is composed of 6 stamens, and the gynoecium of 3 united carpels. The fruit is a 3-locular (i.e., 3-chambered) capsule, or a berry.

In addition to numerous types of lilies used widely as ornamentals, this group of families  includes asparagus, sarsaparilla, saffron, onions and garlic. The several species of Aloe, which includes a popular succulent houseplant, are well-known as herbal remedies for skin ailments, especially burns.

Meadow saffron is the source of colchicine, a chemical widely used in experimental agriculture to interfere with spindle formation in cells so that the chromosome number of plants may be artificially increased. Polyploid plants are often larger and more vigorous than their diploid relatives.

Liliaceae, sensu stricto (in the narrow sense). Traditionally a rather large and diverse family, the Liliacae has now been divided into a number of smaller  families. In Ohio, there are only two genera in today’s trimmed-down Liliacae: Lilium (lily) and Erythronium (trout-lily). 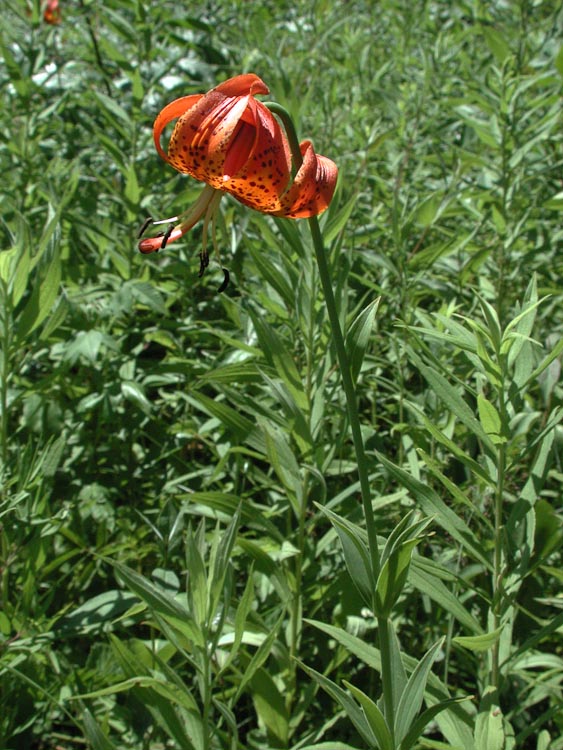 Lily flowers demonstrate well the perianth feature wherein sepals and petals are both present (3 of each), but they are all colorful, petal-like, and so similar that they are all designated “tepals.” See also the 6 stamens. 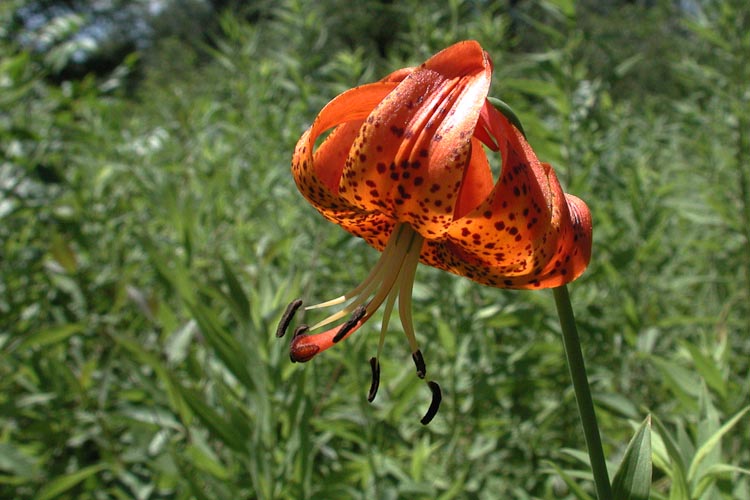 Michigan lily flowers have 6 “tepals” (sepals and petals all petal-like).

Trout-lilies (a.k.a. dog-tooth violet, genus Erythronium) are distinctive even when there are no flowers. Their leaves, often abundant on the forest floor, are cheerfully dark-mottled. The trout-lily flower is solitary, atop a leafless stalk thus constituting a SCAPE inflorescence type. There are two common Erythronium species in Ohio, distinguished mainly by flower color. Here’s the yellow one, E. americanum, It has a northeastern distribution, and is found in moist woodlands. 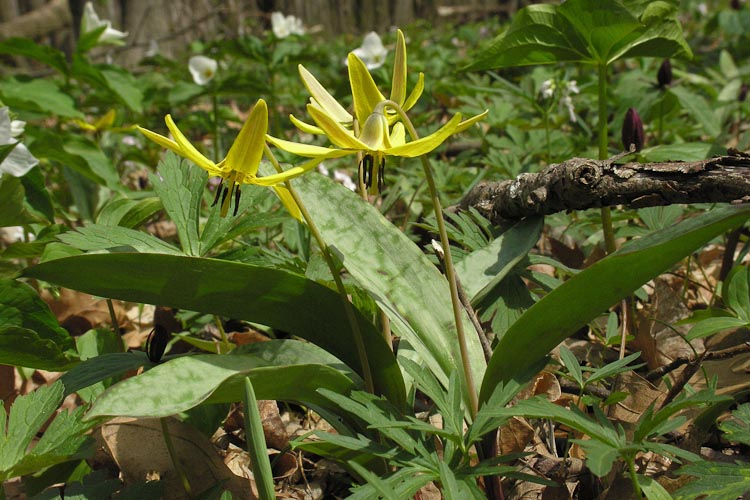 The white one, Erythronium albidum, can be seen in prairies and other open areas as well as in moist woodlands, sometimes right alongside E. americanum. 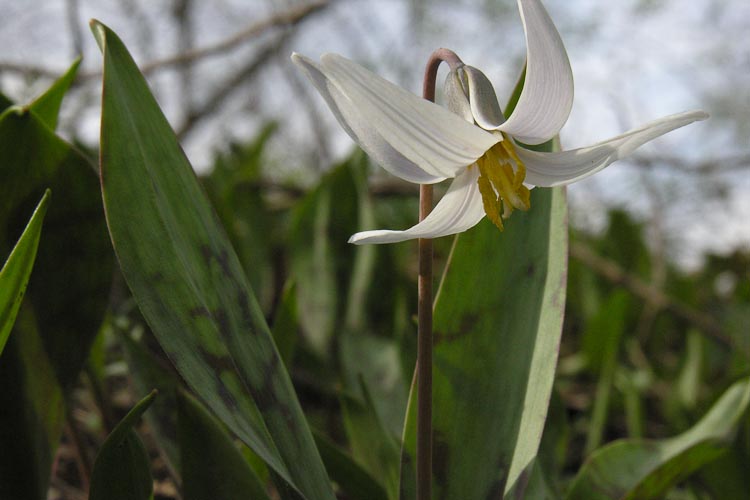 White trout-lily is a scapose perennial herb of moist woods and prairies.

There’s another difference between the two: the shape of the styles: straight in the yellow one; curved outward in the white one.

Like those of many Liliacae, the trout-lily fruit is a capsule. 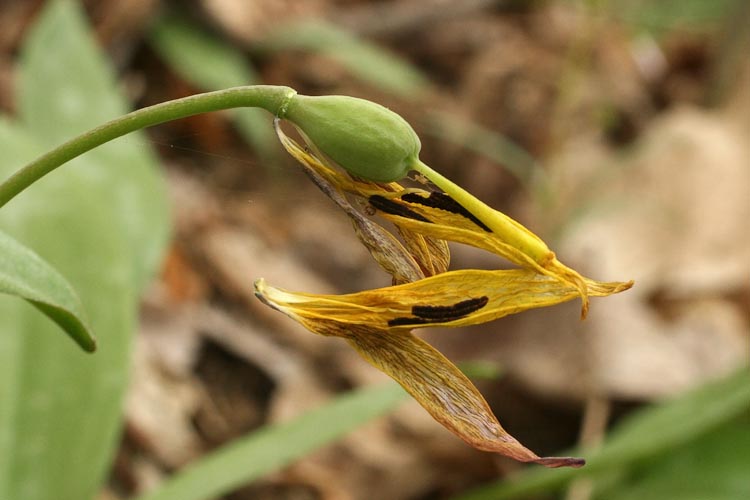 The trout-lily fruit is a capsule.

Agavaceae, the agave family. Yucca plants are amazing! Native to the Atlantic coast, they’ve escaped from cultivation and thrive along railroad tracks. 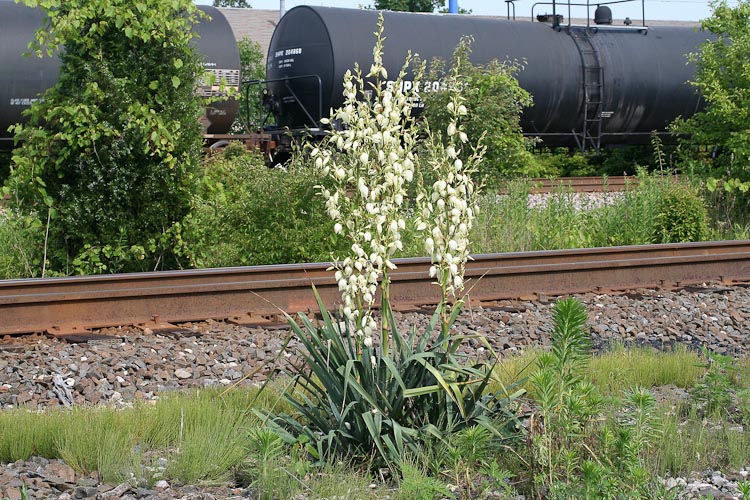 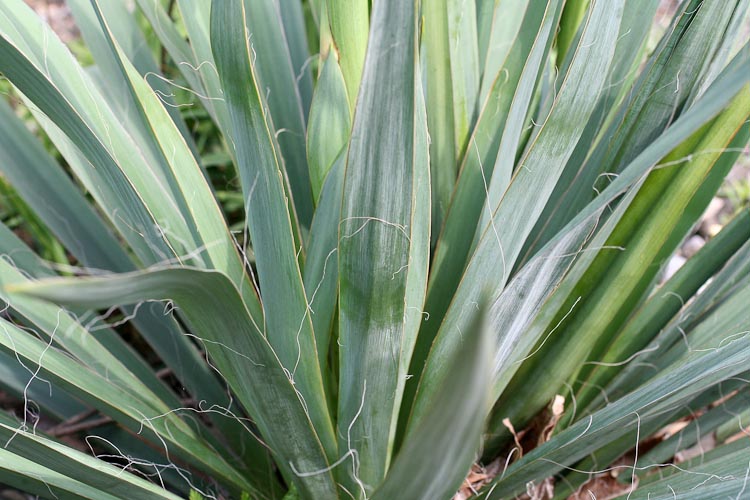 The flowers of yucca are pollinated by small moths that also lay their eggs in the flower’s ovary. The larvae develop within the ovary, consuming some, but not all, of the seeds. 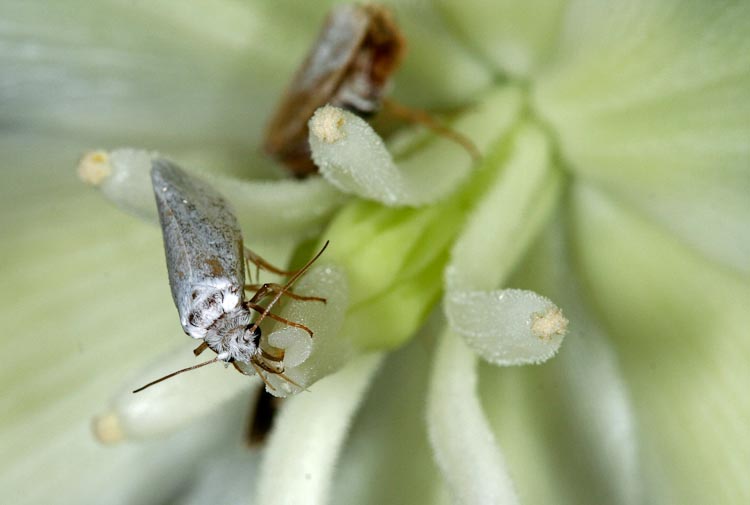 The yucca fruit is a many-seeded capsule. 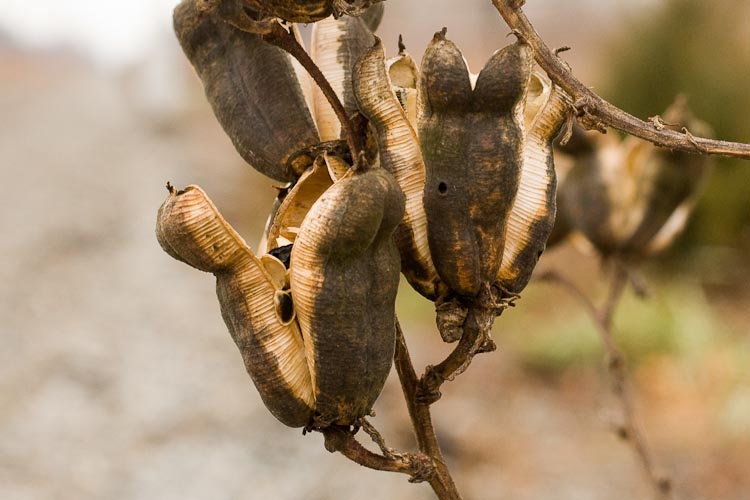 Alliaceae, the onion family.  There are several species of Alium (onion) in Ohio. One of the most distinctive and common is wild leek (also called “ramps), a choice wild edible for making soups and stews. If you collect some from the forest, be careful there are no children around. It would be very awkward if they were to see you taking a leek in the woods! Wild leek is distinctive even without flowers as the shiny broad strap-shaped leaves are all over the place. 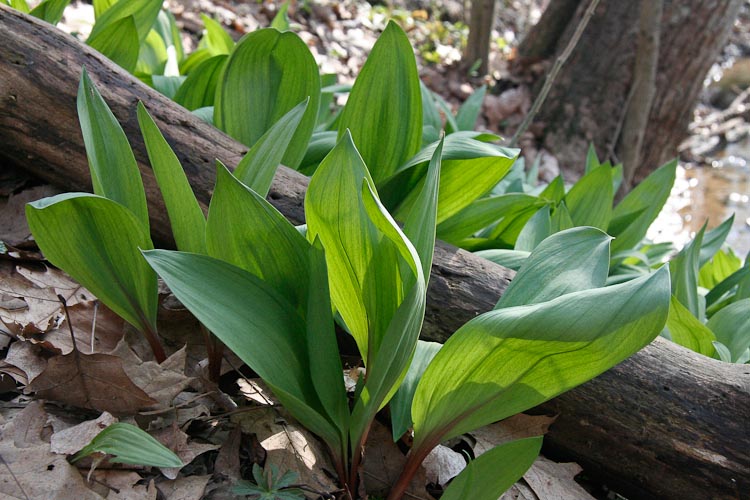 Wild leek is distinctive even without flowers. 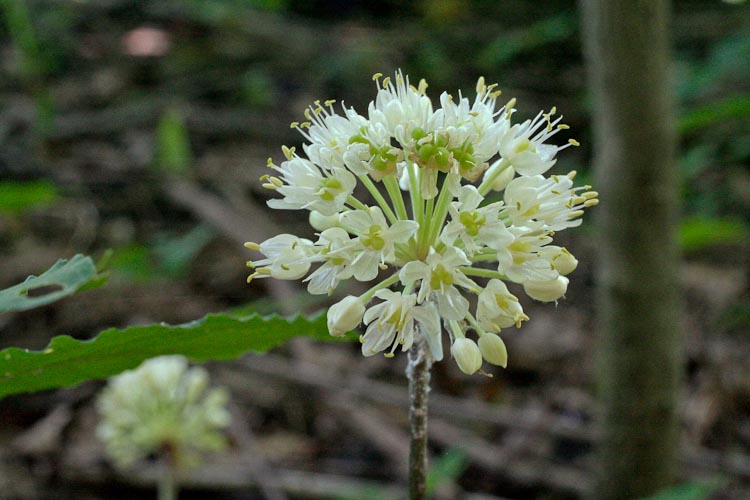 Wild leek flowers are small and white; the inflorescence is an upright umbel.

In more open places such as prairies and roadsides, another onion is rendered distinctive because of its nodding umbel: nodding wild onion, Allium cernuum.

Bumblebees seem to like visiting flowers that require them to hang upside-down. Here’s a video of some bumblebee visits to nodding wild onion.

Convallariaceae, the lily-of-the-valley family. One of the most common, abundant and distinctive woodland wildflowers has the somewhat undignified name “false Solomon’s seal,” owing to a resemblance to another nice woodland wildflower. This is Smilacina racemosa (in older books anyhow; nowadays it’s being called Maianthemum racemosum). Notice the long arching stems with large elliptic leaves, alternately arranged, and very small white flowers in a terminal panicle. 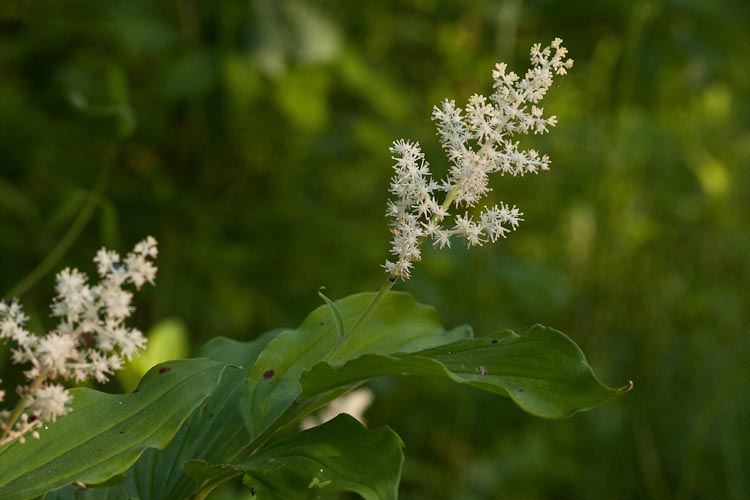 Here’s the real deal, Solomon’s seal, genus Polygonatum. It’s called “Solomon’s seal”  because the underground rootstock is patterned with remnant leaf bases in a manner that apparently looks a whole lot  like the old-time gadgets used (by Solomon, I suppose) to press wax onto the envelope-flap when sealing a letter shut. Solomon’s seal flowers are in axillary few-flowered clusters. This particular species is Polygonatum biflorum, which is found both in woodlands and moist prairies. The Solomon’s seal fruit is a berry. 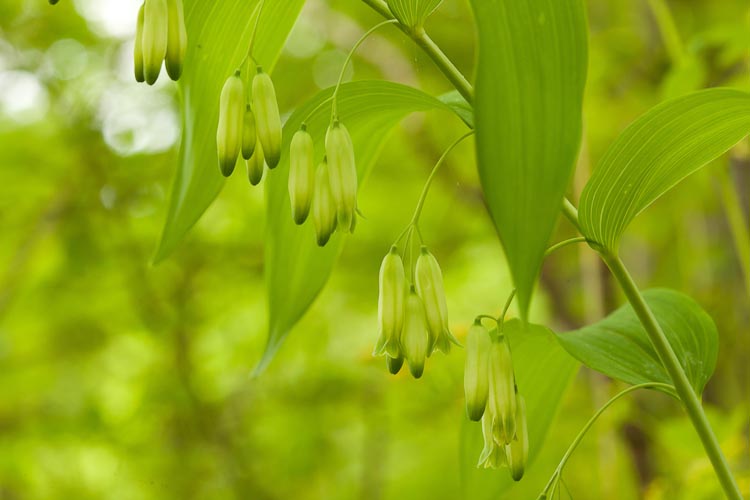 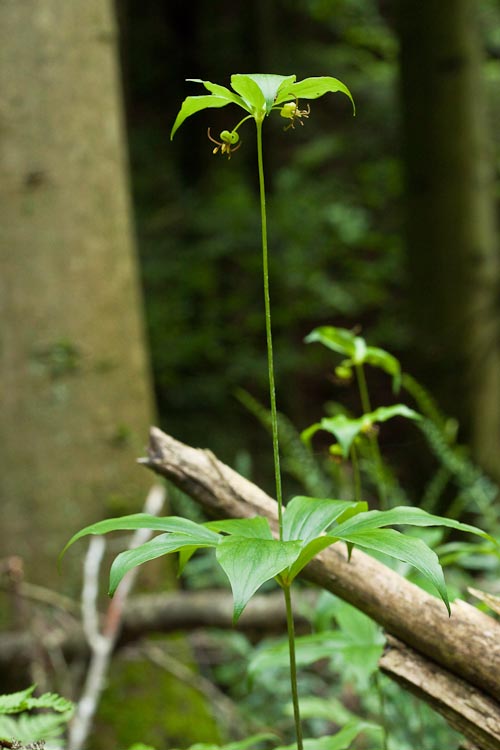 The Indian cucumber-root flower has a set of three strikingly elongate styles. The species seems to be pollianbted by pollen-gathering bees. In the photo below, see a bee gatherinf pollen from an anther, and, a moment later (MOUSEOVER), landing on the elongate stigma of a neighboring flower.

MOUSEOVER the IMAGE to see BEE LANDING ON STIGMA! 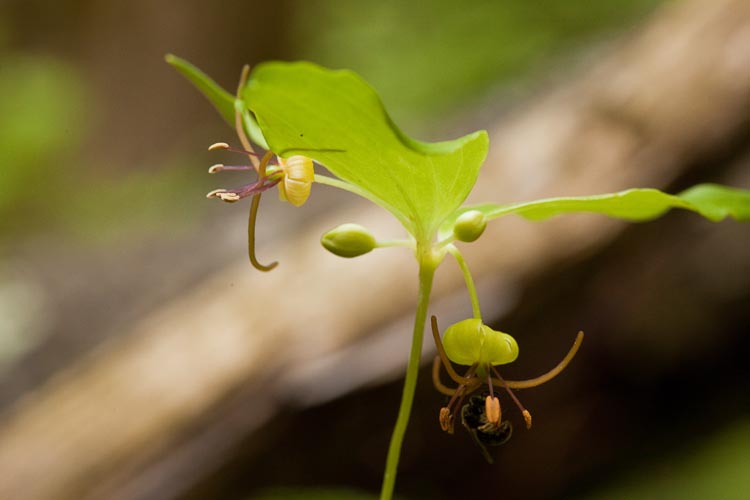 Large-flowered bellwort, Uvularia grandiflora, is a fairly large woodland wildflower with flowers with long drooping tepals that look remarkably leaf-like and so could be passed by without being noticed. 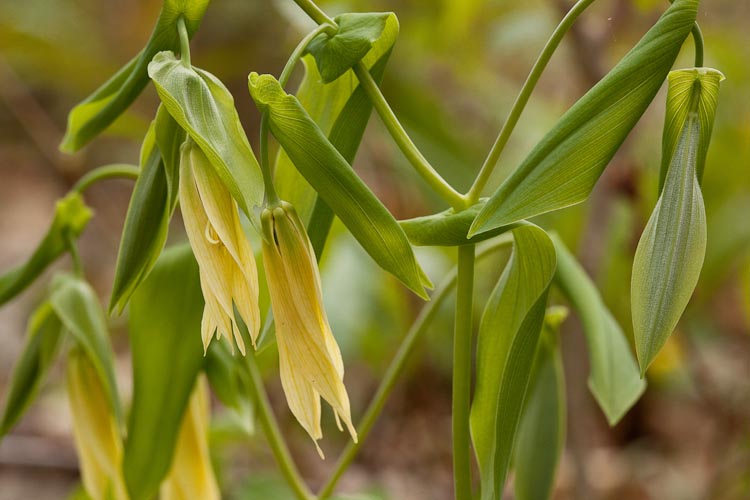 Like other members of the family, bellwort flowers are composed of 3 sepals and 3 petals that are all colorful, 6 stamens, and a syncarpous gynoecium of 3 fused carpels. 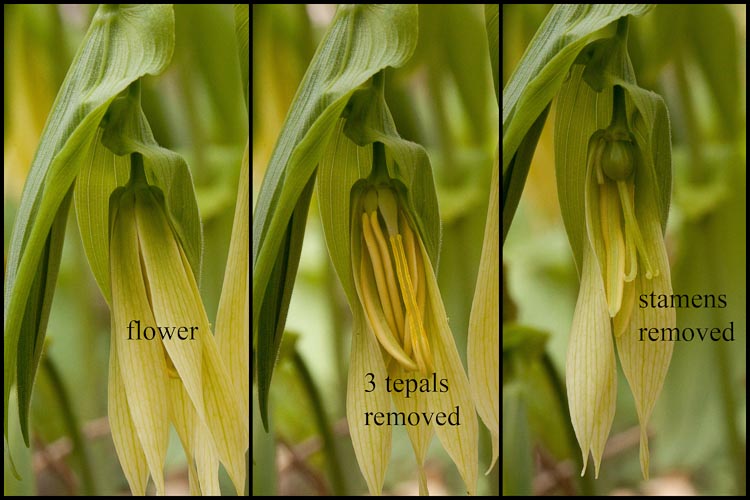 Perfoliate bellwort flowers are typical of the lily family:
six “tepals,” 6 stamens, and a 3-carpellate gynoecium.

Here’s another bellwort species that shows very well the “perfoliate” leaf form wherein the leaf base wraps around, and is fused with, the stem, so that the stem appears to have grown through the leaf. 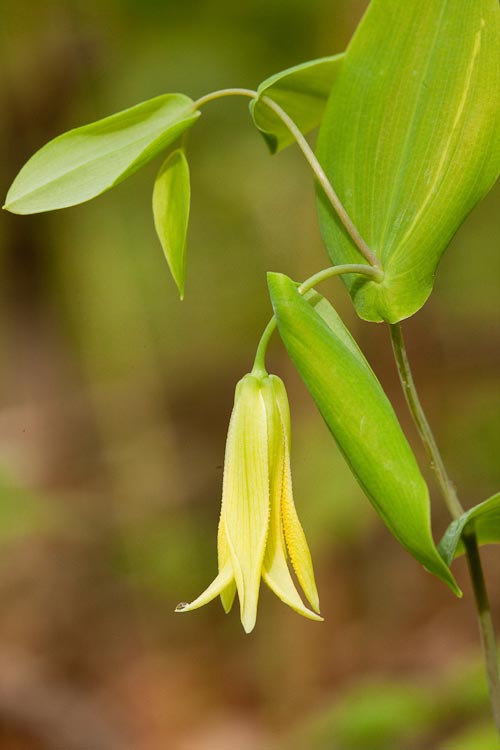 Perfoliate leaves encircle and are fused with the stem. 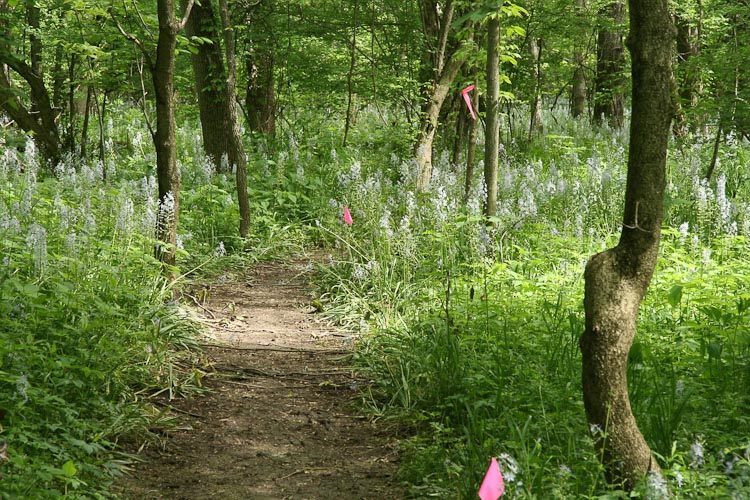 Wild hyacinth is a good example of a “raceme” inflorescence type: elongate, indeterminate (with younger parts at the tip), and the individual flowers stalked. Note also the linear leaf-like “bracts” subtending each flower. 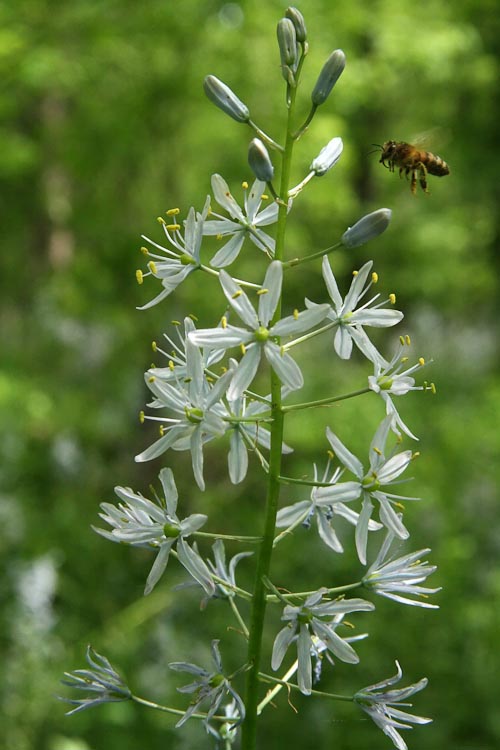 The wild hyacinth inflorescence is a raceme. 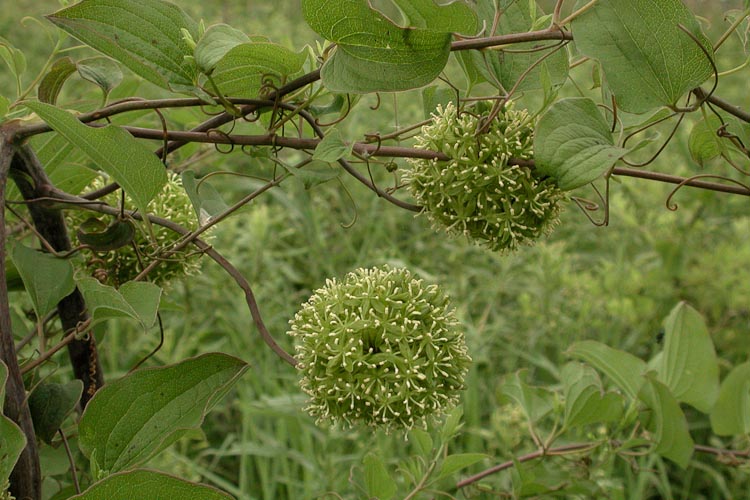 Other members of the genus Smilax display an even greater anomaly in that they are woody! This is quite unusual for a monocot. (Ohio’s only other woody monocot is bamboo.) These are the greenbriars, quite spiny lianas (woody vines) that are quite annoying for anyone except maybe Br’er Rabbit. 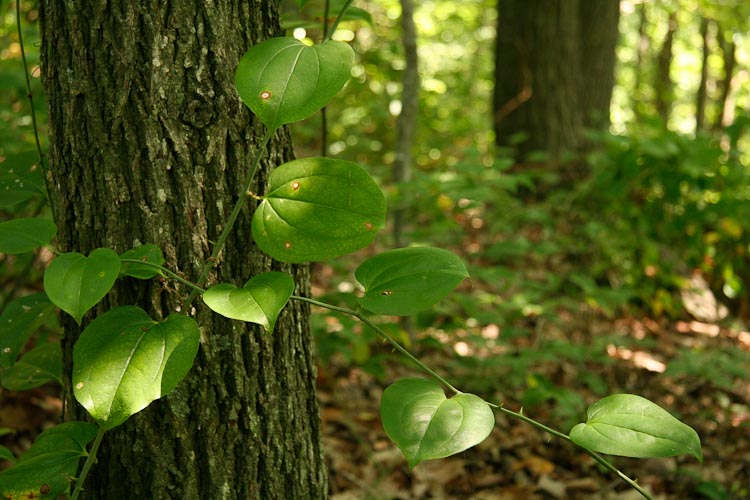 Greenbriar is a pain to walk through.

Trilliaceae, the trillium family. Trillium is an extraordinary genus, especially show, and different from other members of the lily family in that the sepals are green. They look like sepals…there’s none of this silly “tepal” stuff. One of the most common, conspicuous, and indeed popular trilliums is large-flowered trillium, Trillium grandiflorum. 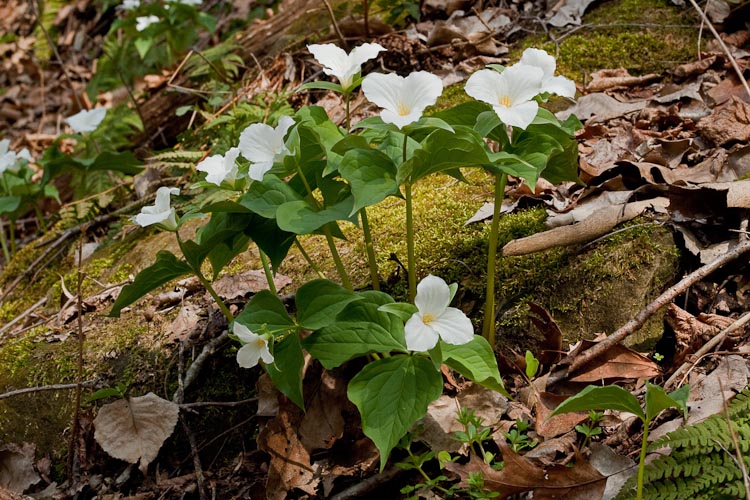 Large-flowered trillium is often quite abundant.

Large-flowered trillium is immortalized in Ohio’s signage for its scenic byways. 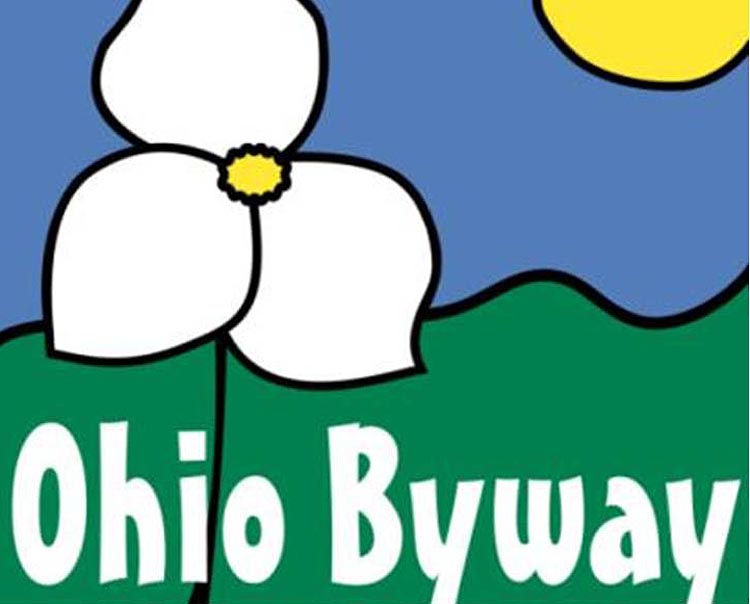 Toadshade, also called “sessile-flowered trillium” (“sessile” means lacking a stalk, as these flowers do) is often common in the same moist woodlands as the large-flowered one. 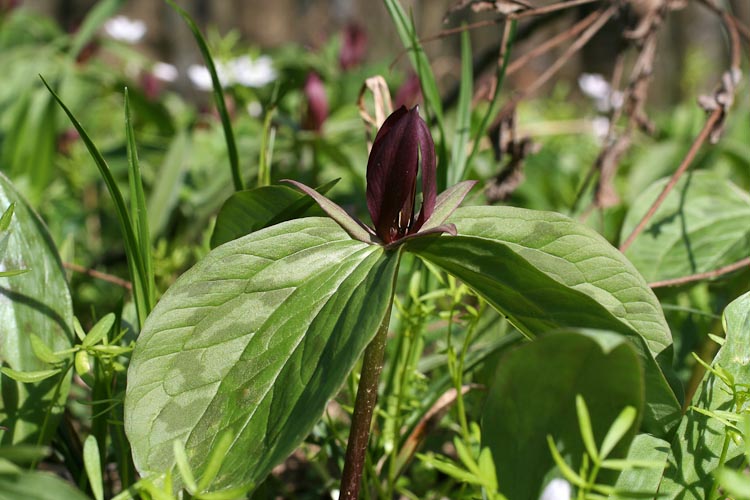 “Sessile” means lacking a stalk. Toadshade is a sessile-flowered trillium.

Careful observation in a woodland crowded with large-flowered trillium will sometimes reveal a few plants of a different, but quite similat species, noddong trillium, T. flexipes. 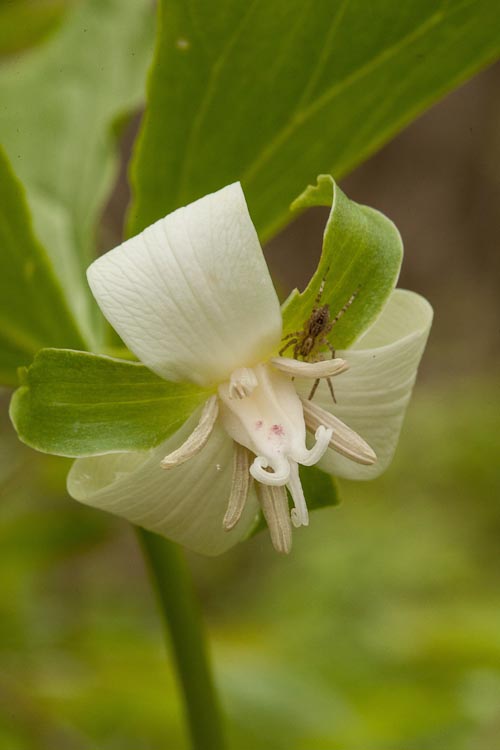 Nodding trillium is occasional in most woods.

Asphodelaceae, the day-lily family, includes the day-lily genus Hemerocallis. These are not native to Ohio and can be quite weedy, especially in prairie restorations or along roadside, spreading from cultivation.

Yellow day-lily (there is a common orange species as well)

Lilies to Know and Love 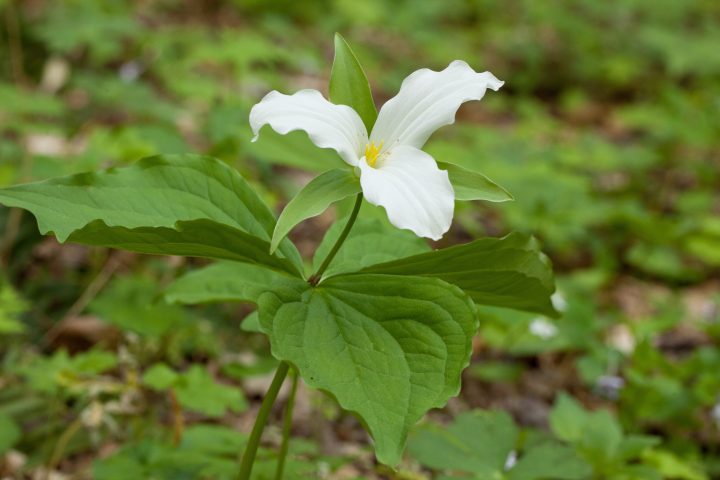 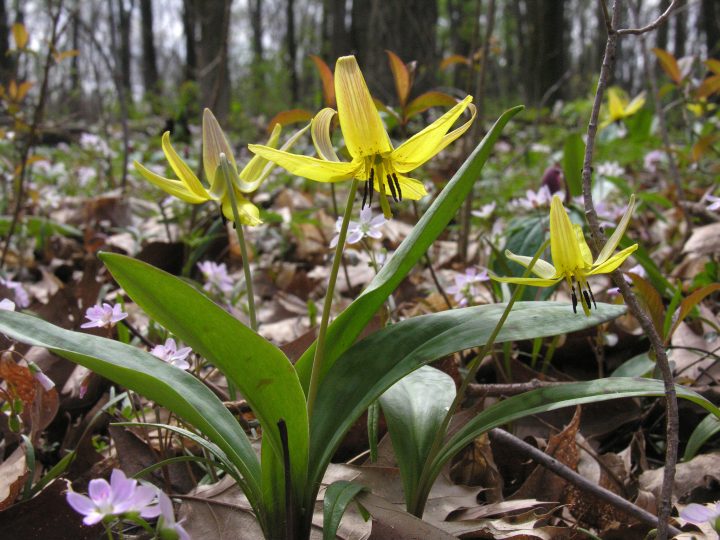 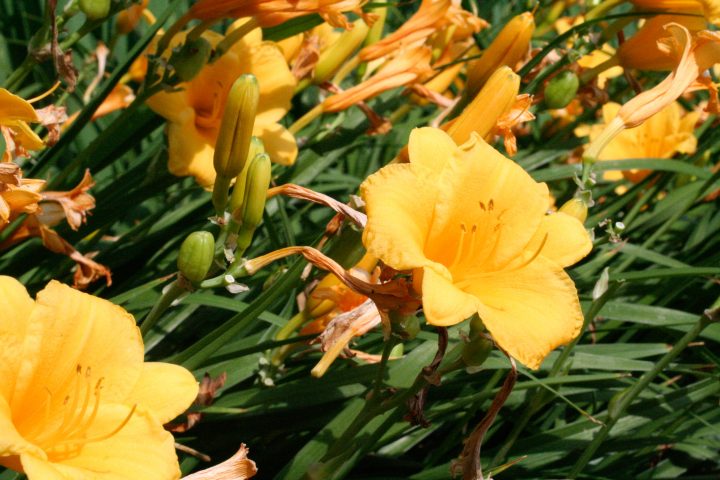 Day-lily, genus Hemerocallis, can be invasive in prairie restorations and along roadsides.