A fruit is mainly an adaptation to effect seed dispersal and, as as such, is one of the few parts of a plant specifically “meant” to be eaten. Typically, portions of the ovary are nutritious, but the seeds, indigestible, pass though the fruit-eating animal unharmed (perhaps along with a little added fertilizer!). 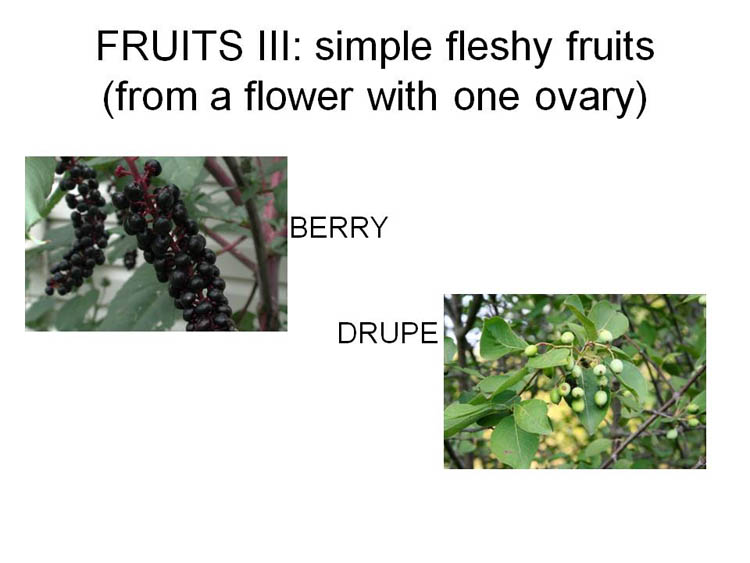 Fleshy fruits are categorized based, in part, according to whether all of the fruit is fleshy, or instead there are bony or leathery parts. As such, a BERRY is the fleshiest of the fleshy, with the outer covering (exocarp), mid-section (mesocarp) and closely seed-surrounding center (endocarp) all being soft and digestible. Berries can be one-seeded or several-seeded. (Incidently, a lot of household fruits with “berry” as part of their name aren’t actually berries. Strawberry? Not a berry. Blackberry? Nope. Raspberry? Uh-uh. Blueberry? Yes.)

Below, feast your eyes on pokweed. This native wildflower, a favorite food of the now-extinct passenger pigeon, deserves a little more respect than it is usually afforded.

SLIDE the image to see pokeweed in flower.  Pokeweed fruits are berries.

In a wildly successful, never-ending attempt to annoy our neighbors through botany, we are endeavoring to grow the biggest pokeweed plant in Columbus, in our front yard. It’s shaped sort of like an elm tree. 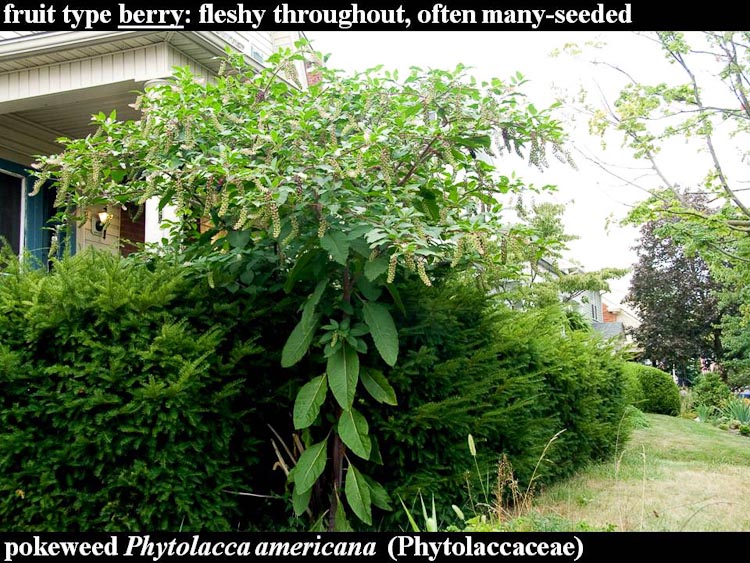 “How are you?” “I’m peachy!” “Oh, I’m sorry to hear that.” “Why are you sorry?” “”Because that must mean you are feeling kind of drupey” “Arghhh. That joke is really the endocarps.”

Another very important, widespread fleshy fruit is the DRUPE. A drupe, also known as a “stone fruit,” is fleshy nearly throughout, except that it has a “pit,” i.e., a thick bony endocarp surrounding a single seed in the center. Not only the peach, but also the cherry and plum are familiar drupes that happen to all be within the same genus, Prunus (family Rosaceae). Incidently, the almond “nut” (it isn’t really a nut) is the stone of another Prunus. What you crack open with a nutcracker to expose the edible seed inside is the endocarp. The almond resembles a peach pit because it practically is one. The drupe is a common fruit type found in several plant families (often loosely called “berries.”)

Below, black-haw. This is a common woodland shrub, a member of a family mainly consisting of opposite-leaved shrubs, the Caprifoliaceae, with three especially well-known genera: Viburnum (virburnums), Lonicera (honeysuckle), and Sambuscus (elderberry).

SLIDE the image to see black haw in flower.  The viburnum fruit is a drupe