A FRUIT is defined as “a ripened ovary containing seeds.” Some “fruits” depart slightly from that definition. A large tight cluster of many individually small fruits may be presented or dispersed as a unit, thus it isn’t “a” ripened ovary, but many of them. AGGREGATE FRUITS are clusters of small fruits derived from the separate carpels of a single (apocarpous) flower, whereas the individual little fruits on a MULTIPLE FRUIT can be traced back to separate flowers themselves tightly bunched in a head-like flower cluster (“capitulum” inflorescence type). These two multi-ovary fruit types can appear nearly identical in form, as a raspberry (aggregate) resembles a mulberry (multiple). 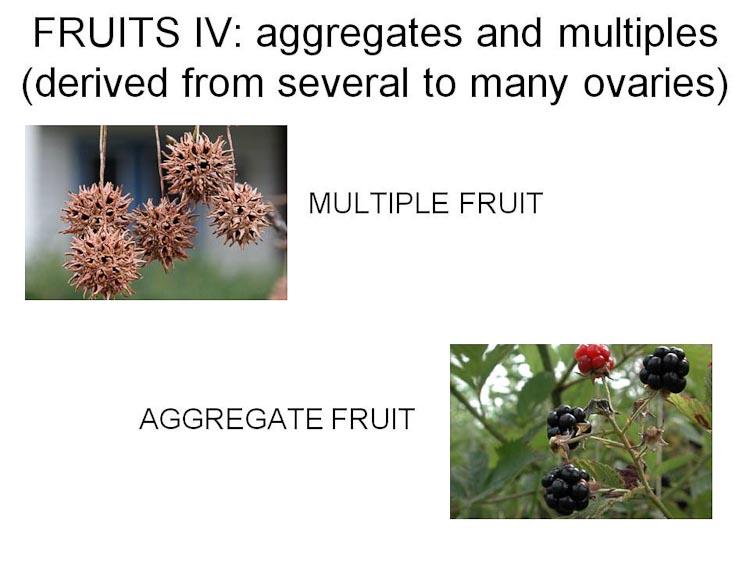 SLIDE the image to see blackberry in flower

A blackberry is an aggregate of drupelets

Below, sweetgum in all its magnificence. This delightful tree is a southeastern lowland species that is native to Ohio, but just barely so. It does very well as a street tree, however, hence it is planted a lot. Sweetgum produces inch-wide spiny balls that fall to the ground specifically to annoy people. Do not dance barefoot beneath a sweetgum tree.

Sweetgum fruit is a multiple of capsules

Another way for a “fruit” to depart slightly from the textbook definition –“a ripened ovary containing seeds” –is for some organ other than the ovary to get involved. These so-called ACCESSORY FRUITS (sometimes called “FALSE FRUITS”) are not very common, but two of them are very well known. 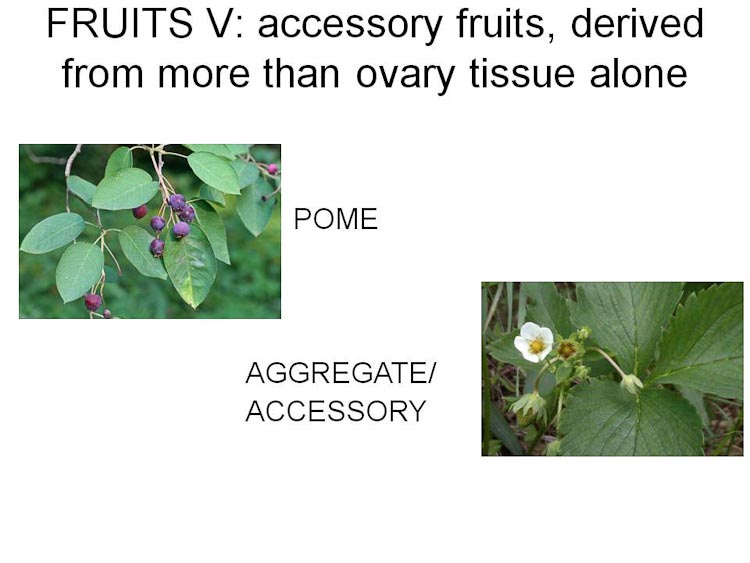 I think that I shall never see, a POME as lovely as a tree.

Below, shadbush. This early-flowering tree is also called “service-berry” because, in colonial times when there was a death during winter with the ground too frozen to perform a burial, the affair was postponed until spring, when these trees were in bloom (hopefully cheering things up a bit). The fruit is a POME, same as an apple or pear (or quince). A pome is the characteristic fruit just of one subfamily (Pomoidea) of the rose family (Rosaceae). It is derived from an inferior ovary (hence the accurate distinction between the “stem end” and the “blossom end” of an apple) which can be seen as the “core” deep inside all the delicious fleshiness. The fleshy part of the pome is the hypanthium.

SLIDE the image to see service-berry in flower.

The service-berry fruit is an apple-like pome.

Below, the most peculiar “fruit,” the strawberry. Found only in two genera in the rose family (Fragaria and Duchesnia), Mr. Strawberry turns the notion of a fruit inside-out! The strawberry flower is a typical rose family bloom, essentially what you see in cinquefoils (Potentilla), avens (Geum) and raspberry (Rubus, near the top of this page): regular symmetry, separate flower parts (except for a small hypanthium), and most importantly, an apocarpous gynoecium with many spirally inserted carpels sitting on a thimble-shaped base called the receptacle. When the strawberry progresses into the fruiting stage, the receptacle becomes swollen and fleshy while the actual fruits, single-seeded ACHENES, remain attached, sunken into small pits on the surface of the receptacle.

SLIDE the image to see strawberry in flower.

The strawberry is an accessory fruit.

“Honey, I’m going to the grocery store to buy some fruit.”
“What do you plan to get, Sweetheart?”
“Lots of things. I want some achenes, a pound of grain, some legumes, drupes, and berries… a pepo, a bag of pomes, and some of those delicious accessory fruits that have many achenes covering the expanded and fleshy dome-like receptacle of a single flower.”
“You’ve been talking very weirdly since you started taking Local Flora, Sweetheart! But don’t forget we’re out of chicken embryos, and on your way home, would you please stop at BP and fill the car’s tank with mixed liquid aliphatic hydrocarbons?”